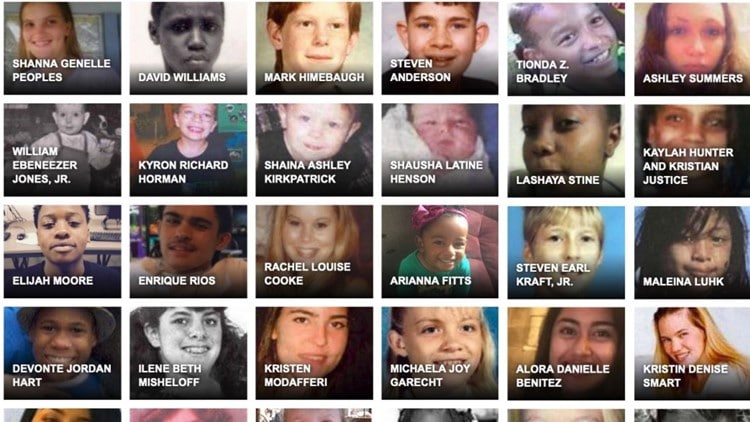 When a 13-year-old North Carolina girl went missing last fall, the FBI and state and local partners worked quickly to locate her—more than 900 miles from home in Oklahoma. The man who lured the girl away was arrested and is facing state charges. The girl was returned to her family.

Sadly, though, not every missing child is found. Many of the children on the FBI’s Kidnappings & Missing Persons webpage have been missing for months or years. In recognition of National Missing Children’s Day—held every year on May 25—take a look at the faces of the missing children seen here and contact law enforcement if you have any information that might bring them home to their families.

The FBI’s Violent Crimes Against Children Program works with federal, state, local, tribal, and international partners to help identify and locate child victims. The FBI’s Child Abduction Rapid Deployment Teams provide support to law enforcement in the critical hours immediately after a child is abducted, especially by a non-family member. The FBI also works with the National Center for Missing & Exploited Children and contributes to international task forces that investigate crimes against children.

National Missing Children’s Day is also a reminder of the importance of being prepared should the unthinkable ever happen to your child, and one thing parents can do is to download or update their children’s information in the FBI’s Child ID app. The app, available free for both iPhones and Androids, allows parents to keep updated photos and physical descriptions of their children available on their smartphones. If your child goes missing, you can quickly send the information to authorities. (The FBI does not collect or store the information or photos you enter into the app. The data resides on your mobile device unless you choose to send it to authorities in an emergency.)

When the song Runaway Train was released 25 years ago, the music video showed images of real missing children. As a result of the video’s reach on national television, 21 of the missing children were found.

To mark the song’s anniversary this year, the FBI’s partners at the National Center for Missing & Exploited Children (NCMEC) have revamped the song and made a new video for the Internet era. Users who watch the video online will see images of missing children in their local area. According to NCMEC, 61 percent of children reported missing are found in the state where they went missing, meaning the local approach is crucial.