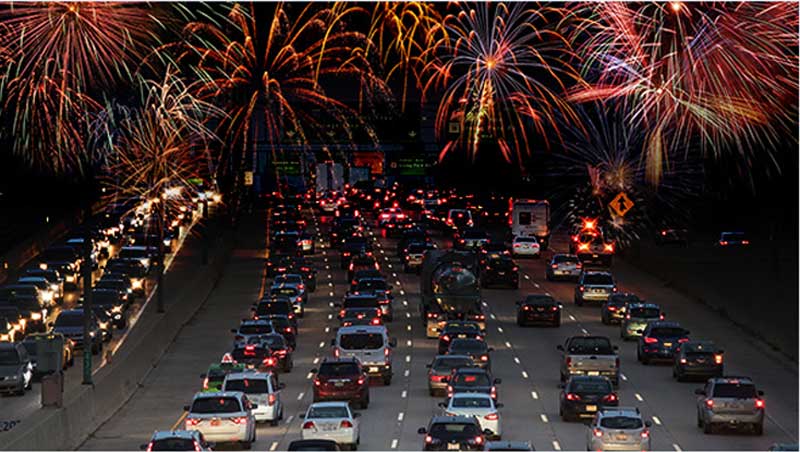 More Americans than ever recorded by AAA, nearly 49 million, honor the red, white and blue with an Independence Day getaway this year. (AAA began tracking holiday travel in 2000.) Overall travel volume for the holiday is up 4.1% over last year, and for the record-high 41.4 million Americans who travel by automobile this Independence Day, INRIX, a global mobility analytics company, predicts drivers could face delays as much as four times a normal commute.

For the 41.4 million Americans traveling by automobile this Independence Day, INRIX, in collaboration with AAA, predicts drivers will experience the greatest amount of congestion on Wednesday, July 3 as commuters mix with holiday travelers. In major metros, drivers could face delays as much as four times a normal commute. Nationwide, delays are expected to increase by approximately 9%.

“With record-level travelers hitting the road this holiday, drivers must be prepared for delays around our major metros,” said Trevor Reed, transportation analyst at INRIX.

With today’s national average of $2.61, gas prices are 23 cents less year-over-year and expected to drop even lower into the summer. This is motivating record numbers of travelers to take road trips for the holiday weekend. AAA does not expect the increased gas tax in Illinois, set to take effect on July 1, will have any impact on holiday travel volumes.

Some of the savings travelers are enjoying from lower gas prices will go toward other travel costs this holiday, which are trending higher. According to AAA’s Leisure Travel Index, airfares on average are 10% more expensive compared with last Independence Day, while average car rental rates are 5% higher than last year, at $69 daily. Meanwhile, midrange accommodations are expected to cost travelers between $153 for AAA Two Diamond and $189 for AAA Three Diamond Rated hotels.

For those travelers planning an international vacation, Europe is the destination of choice. Rome, London, Dublin and Paris are the most popular spots for international vacations this Independence Day, with Vancouver, Canada — a top departure port for Alaskan cruises — rounding out the top five.