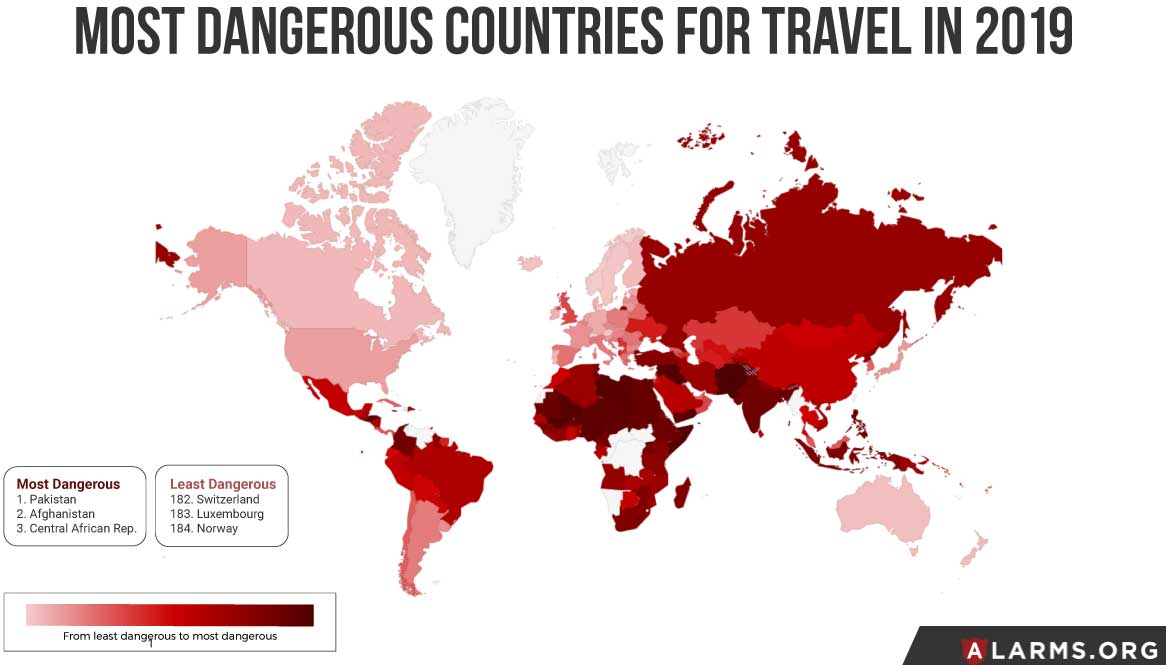 The National Council for Home Safety and Security (NCHSS) has released a thorough report on the most dangerous countries for travelers in 2019. The report contains multiple rankings and points of data for nearly 200 countries, with explanations for why certain countries are considered dangerous (e.g., number of active terrorist organizations, homicide rates, etc.), an analysis of the countries that have become more (or less) dangerous, and a direct comparison of the NCHSS rankings to the most recent U.S. State Department Travel advisories.

In creating this report, the NCHSS hopes to generate awareness for the countries that have become safer for tourists and the ones that are still too risky for even the most adventurous of globetrotters.

The top 10 most dangerous are:

See the entire list of rankings and in-depth breakdowns here. Interestingly, the analysis uncovered several trends for tourists and travelers alike. For example, there were a few island destinations that saw a relatively sharp decrease in homicide rates, such as the ever-popular Jamaica. Furthermore, the NCHSS also noted that for many countries (e.g., Egypt, India, and the Phillippines) tourism trumps safety, as travelers continue to flock to these destinations despite their relatively high rankings.

Several sources contributed to the Most Dangerous Countries for Tourists and Travel report, including the World Health Organization (WHO), the Central Intelligence Agency (CIA), the World Bank Group, and the U.S. Department of State. From these sources, the NCHSS analyzed the five main threats to safety that all travelers face: security, political instability, the quality of medical help, environmental factors, and infrastructure.