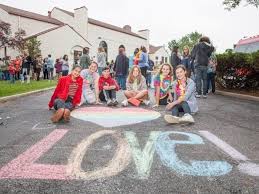 The Village of Homewood is proudly hosting the 3rd annual Lighthouse LGBTQ+ Pride Party on Friday, June 28 from 5 to 9 p.m. in Martin Ave. Square as part of Homewood’s Pride Month Celebration. This is the first time Homewood is hosting the party and celebrating Pride during the month of June with rainbow flags decorating the downtown area. The Homewood Business Association is sponsoring the commemorative flag program which kicks off at the Homewood Artisan Street Fair on June 7. The Lighthouse Pride Party is free and open to the public. More information is at www.HomeSweetHomewood.com

“We are thrilled to expand and move the party to Homewood,” said Lighthouse LGBTQ+ Founder Stephanie Wright. “It is especially impactful that Homewood is embracing Pride month with rainbow flags throughout the downtown. It really shows how welcoming the community is.”

Lighthouse Pride Party features free activities for everyone including hair spray color sponsored by Jonathan Kane, face painting sponsored by John Harrell State Farm Insurance, and a fun rainbow craft sponsored by The Village of Homewood. Cookie decorating, sponsored by Panda Baby, is available with a donation to Lighthouse.

Lighthouse LGBTQ+ provides free support for teens & young adults in the South Suburbs who are processing their sexual & gender identity. Lighthouse also provides special programming throughout the year for members of the LGBTQ+ community and allies.

Lighthouse LGBTQ+ was founded in 2016 by Homewood/Flossmoor residents Valerie Litchfield and Stephanie Wright who connected as moms of LGBTQ+ kids. Working with Homewood Flossmoor High School, they created an informal and affirming opportunity for the LGBTQ+ community to come together, share stories, concerns, questions and experiences. Lighthouse LGBTQ+ meets at the Flossmoor Community Church where the past two Pride celebrations were held.

The third annual Lighthouse LGBTQ+ Pride Party is on Friday, June 28 from 5 to 9 p.m. in Martin Ave. Square as part of Homewood’s Pride Month Celebration. The Lighthouse Pride Party is free and open to the public. More information is at www.HomeSweetHomewood.com

Is remdesivir a promise in coronavirus treatment?

Avoid these 5 food groups to treat your inflammation

2 bodies found in North Side garage